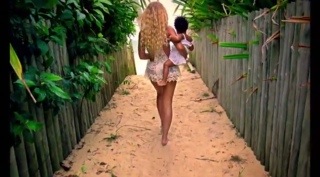 Beyoncé and Blue Ivy in Blue (Picture: YouTube)
Beyoncé’s fifth studio album dropped last night and like the rest of the world, we didn’t see it coming.

The self-titled record features 14 tracks and every single one of them has its very own music video ready and waiting. And she’s also thrown in a few extras, too.

In total 17 30-second previews have gone up on YouTube and we’ve trawled through the lot of them so you don’t have to.

Five worth a watch:

This is definitely a feel-good video and it also features a quick glimpse of Bey’s most closely-guarded secret, Blue Ivy. We’re not too sure how this is going to work but one-year-old Blue is also credited to the song so we’re hoping to get a better look at the pair of them in the full version.

Bey has always been open about her body hang-ups and the message in this beauty pageant-themed video is bound to resonate with lots of young girls. On first impressions it’s reminiscent of Christina Aguilera’s Beautiful.

Bey’s in her undies, dancing, writhing and looking HAWT! if you look closely Jay Z’s also in there too. What’s not to love?!

This one looks like a few high-energy dance routines could come later which most of the other songs appear to be lacking. There’s topless male dancers but more of Drake please!!

The track doesn’t actually feature on the album but we’re pretty sure Beyoncé took a leaf out of Lady Gaga’s book for this one. It’s a stripped back, no frills jobby and Bey appears to be possessed. It’s definitely a bit weird and eccentric but we’re desperate to see what comes next.

Five you can skip:

If you’ve seen Rihanna’s Pour It Up – and you probably have – then you don’t need to watch.

This one doesn’t appear to be on the album, either, and there’s not enough Beyoncé. End of.

We know all the words to this already, it’s a bit repetitive.

Bey sounds as though she’s talking about her miscarried baby in this one. It’s moving and deep but not one to watch if you’re getting ready for the weekend.

Lots of sensual close-ups, black and white and a bit slow. A bit dull, really.